Bill Gibson – Do Whatever It Takes…A Lesson From The Late Dr. Robert Schuller

The scene: Two large round tables of business people at a Fund Raising Event for Dr. Robert Schuller’s (author of Possibility Thinking) Worldwide Television Ministry in Vancouver, British Columbia, Canada in 1986. I was 42 years old at the time. He was 60. The evening before I had the honour to be the Master of Ceremonies for The Dr. Robert Schuller Night in Vancouver (thanks to Jim Janz the organizer) with several thousand people attending…other speakers included Jimmy Patterson (self-made multi-millionaire and the honourable Grace McCarthy). It was one of the highlights and jumping off points of my speaking career. The man was a giant among evangelists and motivational speakers and I had the opportunity to get close to him.

The next day Bev and I and our family attended the small Fund Raiser. Dr. Schuller gave equal time to each table asking each of us to pose a question to him. Someone at our table made the comment that Dr. Schuller had been under doctor’s care and was on a strict diet and posed the question to him; “how do you control yourself and stay disciplined and stay away from those delicious desserts you so love?”

His response was; “there are times in our life we must just take control and become extremely self-disciplined.” The last words had just come out of his mouth when a waiter appeared from nowhere. He then teasingly put the most wonderful looking thick freshly baked piece of lemon meringue pie under his nose and then placed it on the table in front of Dr. Schuller and said “dessert for you, Dr. Schuller?” We all went silent as we waited for his response. His eyes lit up as he stared at the piece of lemon meringue pie and a big smile came over his face. Then he threw his head back and his arms out and in his big booming voice roared; “forgive me Jesus for what I am going to do!” There was a burst of laughter as he took his fork and cut off the front piece of the pie, put it in his mouth and slowly devoured it while making sounds of joy.

Then without saying a word he reached over and picked up a salt shaker, removed the top and poured all the salt on top of the remaining 70% of the pie.

He then looked at us and said something like this…“now, I know I will not eat the rest of the pie because it is now impossible to eat with all that salt on it and sometimes we have to “do whatever it takes”…even if it is painful…to help us be disciplined to overcome the urges and habits that are holding us back on our journey.”

That lesson has always stayed with me. We often say that we don’t have enough time to 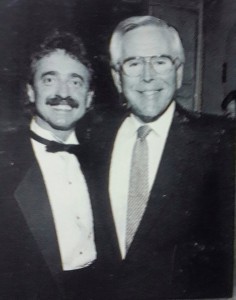 pursue our dreams? We could turn off the Television and set specific times for social media or go off social media for a week. We want to lose weight? We could only shop on the outside isles of the supermarket where the healthy food is found or throw out all the sugar and sweets in our homes. Sounds drastic, although I have never met anyone that has successfully overcome habits and addictions that are holding them back without making hard decisions and most of the time taking drastic measures to make the change. As Dr. Robert Schuller stated that day…sometimes we have to “do whatever it takes.” The photo is of Dr. Schuller and I at The Dr. Robert Schuller Night event in 1986 in Vancouver.

Dr. Robert Schuller passed away this past Thursday, April 2, 2015, at the age of 88. He was the heart and energy behind the building of the magnificent Crystal Cathedral in California. For years millions of people in countries around the world were inspired and uplifted every Sunday morning by him through his Television Ministry. This is my blog tribute to Dr. Robert Schuller and his family. I am sure he is still wearing that beautiful robe. Only now it is white and radiating “white light” that is still touching the hearts of many souls here on earth and beyond. Thank you Dr. Schuller for being such an inspiration to us all. May you rest in peace.

great man. You can learn more about my good friend Jim Janz the author of A Rendezvous With Destiny or order his book by contacting him on: jejanz@telus.net or http://myrendezvouswithdestiny.com/

“If you have found this blog article to be valuable for you, I would be grateful if you “shared” it with your Social Media Networks. Also feel free to circulate it by e-mail or other means internally within your organization or externally to your clients, suppliers and personal and business network. Thank-you!”  – Bill Gibson

Bill Gibson is a Canadian who is living in South Africa. He is an international speaker and author and a developer of sales, service, marketing, collecting, employee morale building, personal development and entrepreneurial training programs and systems. His blog is www.bill-gibson.com and his website is www.kbitraining.com. He can be reached at bill@kbitraining.com or phone +27-11-784-1720 in South Africa. You can follow Bill Gibson on Twitter: @billgibson1, connect on LinkedIn: https://www.linkedin.com/in/gibsonbill or Knowledge Brokers International SA Pty Ltd Facebook Page: https://www.facebook.com/knowledgebrokers?ref=hl